Glenuig has always been a place renowned for music and its social life, but through the 1960s and 70s the population steadily declined. In the early 1980s a new and younger population began to move into Glenuig, and the dormant Glenuig Village Hall Committee was revived. The village hall, then the old Schoolroom that closed as a school in 1966, was again used for dances, parties and other community functions, but it rapidly became too small for the expanding population and the decision to build a new hall was taken.  In 1983 the first Glenuig Games and Music Festival was staged in a marquee in Glenuig. This event was held annually on the first weekend in August until 1993, and was the focus of fundraising for the new Glenuig Hall. 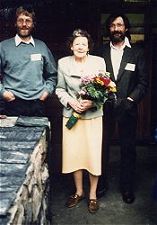 Mrs Jean Lewellyn of Glenuig Estate is shown here after declaring Glenuig Hall officially open. She is accompanied by Alasdair (Pod) Carmichael (left), who supervised the design and construction of the hall, and Eoghan Carmichael (right) who managed the administration and finance of the project.

The current Glenuig Community Association began life in 1982 as Glenuig Hall Committee. Up until the late 1970s the population of Glenuig had been in steady decline, with many of the older inhabitants moving to the comforts of Fort William or further afield – remember, mains electricity did not arrive in the Glen until 1983! In the late 1970s the owners of Glenuig Estate, Mrs Jean Clegg (later Llewellyn) and her family opted for a policy of revitalising the glen and began to make housing available to young families from outside the area. The growing population soon saw an interest in reviving the village hall as a focus for social events.

The hall had at one time been situated in an army Nissen hut located at Samalaman beach, but later moved to the schoolroom attached to the Old Schoolhouse. The school had closed in 1966 after its last pupil (Iain MacDonald) left for Secondary School, and the then Village Hall Committee ceased to function soon afterwards. We are pleased to say that some records still survive from that committee.

At a public meeting held in the Schoolroom on 1st September 1982 it was agreed to revive the Glenuig Village Hall Committee, and a committee was elected as follows:

At a meeting on 27th April 1983, with Eoghan Carmichael, Alistair Wallace, Kenny MacPherson, Simon MacDonald, Davy Garret and Jackie Elam present, the date or the first "Not So Serious Glenuig Games" was set for Saturday 6th August 1983, this to be followed by a ceilidh dance in a marquee. Ambitious planning saw this event rapidly develop into the Glenuig Music Festival.

At the same meeting the date for a "Switching On Ceilidh" to celebrate the advent of mains electricity was set for 30th April 1983 in the Old Schoolroom. This was the first mains electricity to reach Glenuig – up until then Glenuig Inn and Samalaman House ran from generators, the rest of the village made do with Calor gas and paraffin lamps, and using car stereos run off car batteries for playing recorded music.

27th February 1985 saw the final Annual General Meeting of the GLENUIG HALL COMMITTEE and the inaugural Annual General Meeting of the GLENUIG COMMUNITY ASSOCIATION. The change was made to reflect the growing interest in developing the strengths of the community beyond managing and maintaining the village hall. Prior to this meeting a notice was sent to all residents of the area outlining the proposal that a new Community Centre be built in the village. This was the first public declaration of intent to build a new hall in Glenuig although the subject had previously been discussed at committee meetings and elsewhere. Ten years and 32 days later the new Glenuig Hall was officially opened.

In addition to working on the new hall and promoting musical events, the committee were busy on other projects, including organising training courses in computers, dry stone dyking and thatching, the renovation of the pier at Port na Luinge and other environmental improvements in Samalaman Bay, are currently involved in rebuilding the village shop and opening it as a Community Enterprise, and recently helped Lochaber Housing Association develop new houses in Glenuig.

Glenuig Community Association became formally incorporated as a Company Limited by Guarantee but not having a Share Capital in 1993. We are registered as a charity with the Inland Revenue. A copy of the GCA constitution can be found here or hard copies can be provided on request in return for a donation to cover printing and postage costs.

Were you there? Raking through our records, many of which predate the advent of computers in Glenuig, has been an arduous task and finding correct dates for some of these gigs has proved difficult. If you were there or remember any of the dates that are missing please let us know.

Do You Have Any Photos?

Most of us who helped run the festivals were too busy to record much of what was happening, and consequently there is a dearth of photographic evidence that these festivals actually happened. Were you there? Do you have any photographs to prove it? We would welcome photographs or memories of the Festivals to be posted on our website. If you have anything you think may be useful, or would like to reminisce about your experiences at the festivals, please let us know at GCA@glenuig.org.uk