Glenuig  is a tiny community of just over thirty folk located in the Parish of Moidart in remote west Lochaber. Nowadays it is taken to include the neighbouring settlements of Samalaman and Alt Ruadh, and contains 21 houses in permanent occupation plus four holiday homes. 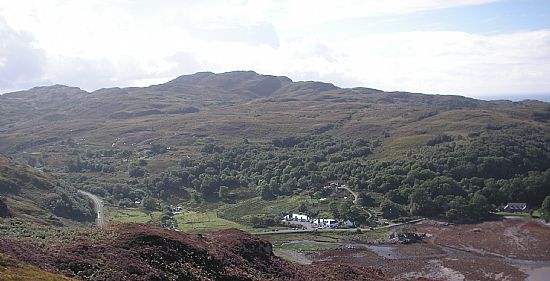 Glenuig has always been a place renowned for music and good craic. Long before the road reached us (in 1966) people used to travel from far and wide (by foot, boat & horseback) for dances held in the hall at Samalaman Beach. Regular musicians were the Roshven Ceilidh Band, featuring Fearachar, Dougie and Donald MacRae, Fergie MacDonald and Angus Grant (Snr). Glenuig was also home to the world famous pipers Angus, Allan and Iain MacDonald. More recently, Glenuig Inn (as was) was a place where Angus Ruaraidh Grant (Shooglenifty) and Iain MacFarlane (Blazin’ Fiddles) honed their craft at many weekend long sessions alongside the likes of Jim Hunter, Jim Michie, Jim Hay (The Three Jims),  Kaela Rowan and the girls of the Thunderbird Band among many others.

Access to Glenuig by public road was only made possible in 1966, and mains electricity arrived in 1983.  Prior to 1966 access was by foot or horseback (from either Lochailort or Kinlochmoidart) or by boat.

The last two hundred years saw a decline in the area’s population through enforced clearances of the glens for sheep and voluntary emigration from the harsher coastal regions to the new colonies, particularly Cape Breton and America.

However, in the early 1980s a growing population of young people saw the revival of Glenuig Village Hall Committee in 1982, running the village hall situated in the old School Room. The Glenuig Music Festivals were run by the local community between 1983 and 1993, and 1995 saw the opening of our new village hall, one of the most splendid on the west coast and a very popular venue for entertainment, regularly hosting traditional folk music, contemporary bands, opera, theatre and dance and a range of community activities and functions.

Nowadays Glenuig is a thriving and friendly community. Occupations include fishing, crofting, building, craftwork and IT, and of course catering for the many visitors to the area. We have a tiny but busy shop and post office and a variety of accommodation choices. Visitors to the area are assured a warm welcome in GlenUig.

22/7 Malin Makes Music12/8 Aly Bain & Phil Cunningham25/10 Scottish Opera
Featured:
Road to the IslesThings to do & places to stay in north west Lochaber
Sunart CentreVisiting the area? Find out what's happening in the Sunart Centre in Strontian. A busy cultural & sporting venue.
ArdnamurchanThings to do and places to stay in south west Lochaber
MoidartA guide to events and places in Moidart