The Glenuig Games and Music Festival first manifested itself at a meeting on 27th April 1983, when the date or the first "Not So Serious Glenuig Games" was set for Saturday 6th August 1983, this to be followed by a ceilidh dance in a marquee.

The aim of the first Games and Ceilidh was to raise funds for the hall committee to make improvements to the Old Schoolroom. It was felt that it would not be appropriate to mimic a traditional Highland Games, but to make the event more fun by having events that all those attending could participate in on a less competitive basis, hence the name. Events at the first and subsequent games included hill races, obstacle races, coconut shies, “soak the hippy”, bungee running etc. etc.. While the original hall committee oversaw the Games, a sub-committee of Alastair & Carol Wallace, Jim Michie, Dave Garrett, Alasdair (Pod) Carmichael and Kenny MacPherson was formed to organise the Music Festival. 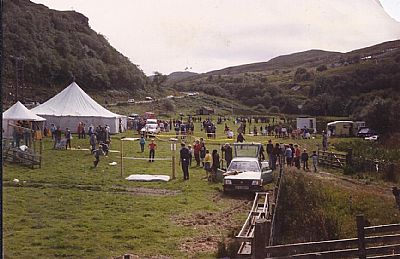 The first Glenuig Music Festival catered to upwards of 1,000 people, at a time when there was no mains electricity in Glenuig. The festival lasted for 3 days and 3 nights and saw bands such as Ossian and the then recently formed Capercaillie take to the stage along with many highly accomplished local musicians, including the late Fearachar MacRath.

Against all the odds and some horrific logistics for a small community of less than 40 people, the first festival was a roaring success and laid the pattern for many more to follow. The marquees grew and shrank, the rain came and occasionally went, the midges held their annual feast. Sometimes we even had toilets.

After the success of the 1983 Festival the Glenuig Music Festival Committee was set up as an organisation in its own right in December 1983 to promote the Festival and other musical events in the area while keeping finances separate from those of the hall committee.

Ambitious planning saw the evening ceilidh grow and develop into the Glenuig Music Festival, which eventually ran for eleven consecutive years. Over the years the festivals brought a wide variety of performing talent to the village. As well as established bands booked for the event, many well-known musicians came along for the craic and either played solo or came together to form impromptu one-off acts (such as Easy Seats on the CD featuring members of both Easy Club and Eat the Seats). Mary-Ann Blackburn of Roshven Farm did an admirable job of the catering, presenting wonderful burgers on their homemade cattle trough barbeque.

Many members of the community, plus innumerable friends from across the country, pulled together to ensure that tents were erected, toilets, stage, PA, lights, seating and everything else were in place, and helped in the stewarding and organising to ensure a successful event. Given that Glenuig was then a very small community of around 30 people, the festivals could not have happened without the assistance of all these friends.

The tenth, and supposedly the Last Glenuig Music Festival in held 1992 and was recorded and released in Cassette Tape and CD format, still available for sale locally or by post (see our Music CD page). In 1993 it was decided to go for one more and we held our “Second Last” Glenuig Games and Music Festival.

To see some pictures of the Festivals see our PHOTOS page